Read the article as published in K-Show Daily Newspaper 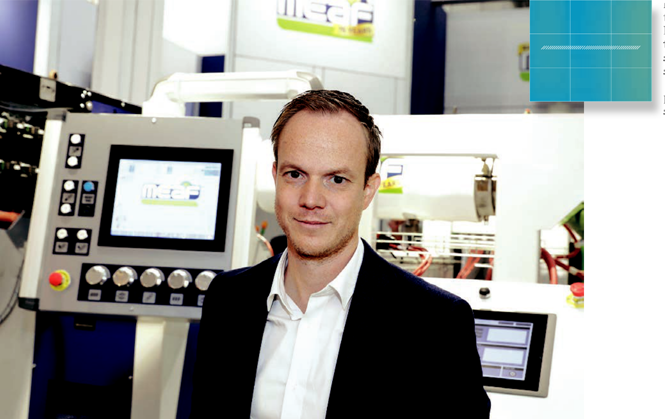 Yerseke, Netherlands-based Meaf Machines BV has a long history, having opened in 1947. But things have changed. Operations Director Elwin Houtekamer told Plastics News at K – The World’s No. I Trade Fair for Plastics and Rubber that the company had grown into producing thermoforming machines but abandoned that activity about four years ago by deciding to focus on a core activity of sheet extrusion lines for thermoforming applications.

Some 60 percent of the sheet lines are built for flexible offline use with smaller production runs, 40 for large volume but less flexible inline production use. The latter can be applied to any thermoforming machine producer’s equipment. Houtekamer says Meaf tries to standardize “in a smart way” with 80 percent standard module content and 20 percent tailormade features.

It is the third time that Meaf has exhibited at K, where its highlight is the adoption of Microcell foam extrusion technology from Winterthur, Switzerland-based Promix-Solutions AG (Hall 9, Booth E18), so that Meaf now offers sheet extrusion lines for foamed polypropylene and PET to its thermoforming customers. Aside from foamed sheet extrusion lines, the company’s emphasis at K includes replacement of latex artificial grass backing with extruded TPE sheet as a more “circular” solution.

Showing samples of 500- and 700-micron-thick foamed packaging trays produced on Meaf’s laboratory equipment, Houtekamer explained that wall thickness is higher than equivalent compact trays, but there are advantages of higher rigidity and better thermal insulation. But the bubbles have to be small and equal sized to obtain high stiffness, he stressed.

As with most foamed plastic parts, a typical structure appears on the surface, but it is a dotted effect, as opposed to long swirl patterns typical for structural foam moldings. For customers concerned about this visual effect, Houtekamer says Meaf is prepared to offer lamination units to cover the sheet with smooth film, a technique also favored by Meaf for customers seeking barrier properties.

Meaf is developing foamed sheet with greater insulation and rigidity, so thermoformed products can handle higher temperatures. A key feature of the foamed sheets is 10-20 percent less plastic raw material use, along with greater energy efficiency.

Meaf provides the flexibility of a small company that outsources many of the components needed to build its sheet extrusion lines to “the best companies we can find. Outsourced items include mechanical components, construction, welding, panel building and software.

“We used to do everything ourselves in the past — melt pumps, dies, etc. — but we now outsource, without giving away our know-how.” This approach enables Meaf to exploit its small size to advantage through “good cooperation, high flexibility and fast reaction to customer needs, including shortening a line if space is limited, always with the goal of using a relatively small team to build the machines,” Houtekamer said. Customer confidence is built up by a policy of testing all machines in Yerseke before they are dispatched to customers. “We can easily scale up or scale down in line with the market,” Houtekamer said.

This approach has reaped benefits, with sales in the range of €5 million to €6 million in 2020 now extending into the €9 million range. Although growth “was a bit lower during the COVID pandemic,” continued growth has encouraged Meaf to extend production with a new assembly hall. “Of course, we have supply chain problems — electronic chips, for example — but every producer in Europe faces such problems. Customers don’t always understand this, but a missing microchip can mean we can’t deliver a line,” Houtekamer said.

The company maintains a strategic level of stock of electronic components, gearboxes, screws and barrels in order to overcome or alleviate supply chain problems. Meaf supplies lines all over the world, but it wants to now focus more on the European market, Houtekamer said.

Coming back to the subject of the circular economy, Houtekamer said Meaf machines can be optimized for processing post-consumer recyclate, especially PET bottle flakes. This area is growing now, while many Meaf customers have already been processing post-industrial resin.